Voting in Hirshablle abandoned after MPs cause major disturbance 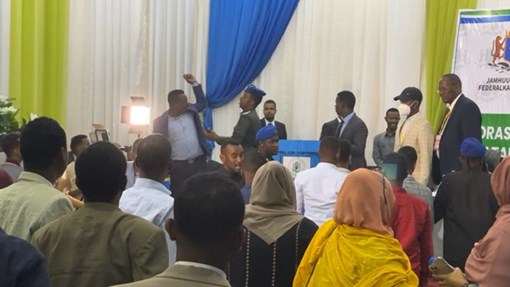 Hirshablle MPs abandoned the federal senate election in Jowhar on Saturday after unhappy candidates and their supporters chanted angry slogans and physically obstructed election administrators from conducting the vote tally - at one point cutting live TV coverage and shutting off the lights in the election venue.

Hirshabelle parliamentarians gathered in Jowhar, the regional capital, to vote in two more senators for the upcoming Federal Upper House of Parliament.

Reports indicate that the disturbance began after the first round of voting. Abdikadir Hanafi led with 35 votes, followed by Abdalla Abdi Hussein with 29 votes, Ali Shabaan with 28 votes and Asha Hussein, the lone female in the race, trailed far behind with two votes.

Video coverage of the election show several men huddled around the voting table as parliamentarians await the official results of the first round. Electoral rules stipulate that only two candidates can advance to the second round of voting.

At around this point, An MP who was upset that Ali Shabaan would be left off the ballot in the run-off vote approached the voting table and began to grapple with security officials as the election moderator struggled to regain control of the situation.

On several occasions, the election moderator can be heard calling on security officials to "do their job" remove the boisterous MP's so that voting can continue.

Shortly after that, the lights in the venue went out, and TV coverage was cut.

Hirshabelle's President and Vice-President were not present in the election hall during the vote.

Before this election, at least one candidate says that he was pressured to drop out of the Hirshablle senate race under the threat of violence. He has since fled from Jowhar to Mogadishu.